The W.M.F. has several committees which meet for the exchange and development of ideas all with the aim of promoting Muaythai.

One of the W.M.F.’s proudest successes has been the development of Muaythai for females, countering the traditional view in Thailand that it was a male sport. Now several organizations promote female boxing and events featuring girls are often televised both inside Thailand and indeed all around the world.

The 2012 Amateur World Championships featured another new initiative with the introduction of Cadet Muaythai – Muaythai competition for youngsters, giving them a rare experience of fighting on the big stage.

Worldwide the benefits of sport for individuals and communities is widely understood. The W.M.F. head office and country representatives are proud to work with Governmental, and non-Governmental organizations presenting Muaythai in any projects or events. The W.M.F.’s central office is always happy to co-operate with the organizers of these kinds of ventures. Maybe YOU too can get involved!

Muaythai art – the name of this traditional martial art comes from Thai Language: “มวยไทย“(m-wa-i tha-i) and pronounces as [mūɛj tʰāj].

Muaythai is a combat sport based on the muay traditional martial arts of Thailand that takes place on the ring when 2 fighters stand-up striking along and use various clinching techniques.

This kind of sport has 2 components: mental and physical. Muaythai boxing art became popular from 1500ths years but mostly in Thailand and neighboring countries, but in the 20th century it gave a lot of popularity and from 1980th before today were opened many Muaythai gyms in US, Canada, Europe, South Americe and other countries.

Muaythai sport rules are fully based on it’s martial art which originally calls “Muay” (not to be confused with “Muaythai”).

From 1929 it is necessary to use on the ring the boxing gloves. And according to new rules of Muaythai were permitted grabs and throws, header and some more innovations which allowed to join this sport to some kind official. In 1977 in Europe was famous fight between Muaythai boxers and fighters of Kick Boxing, and despite the fact that used rules were different than Muaythai, Thai team won and made it popular in Western Countries.

International amateur Muaythai Federation use color classification for pratiats accordingly and mongkonas accordingly to the fighter’s level. But in some Western countries this practise is not main because of existing of official sports titles.

In the below you can see the cell with Muaythai grading for young athletes: 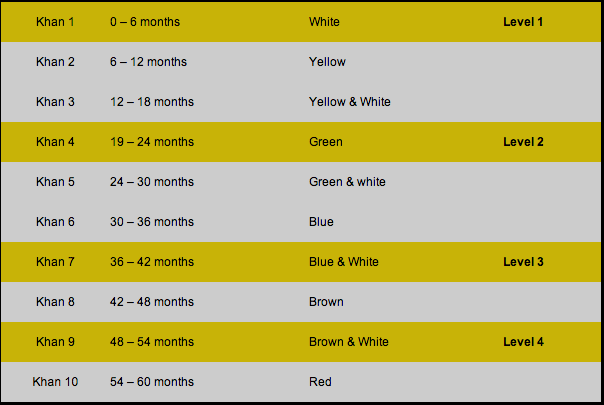